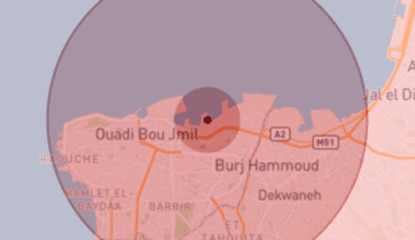 How Can Self-Service Analytics Help Respond to Crises

On August 4th, 2020, a devastating explosion rocked the Lebanese capital city of Beirut. The UN Refugee Agency has reported more than 200 fatalities and missing people. Being half-Lebanese, I had family directly impacted by the blast. My great-grandfather’s home (and my dad’s birthplace) was destroyed (luckily no one was inside), and there were family members in another near by apartment who had cuts and bruises from shattered glass, collapsed ceilings, and blown-apart doors. To help deliver supplies and offer food to those displaced by the explosion, I traveled to Beirut with my father on August 10th.

We worked with World Central Kitchen, a non-profit organization run by José Andres and his wonderful team that go to places affected by disaster and provide food and aid to those affected. We made food in multiple kitchens and delivered the meals all around Lebanon. World Central Kitchen also partnered with several local restaurants to help make food that we would then deliver to those in need. On average, World Central Kitchen delivered 10,000 meals per day. A lot of the time, we were busy making the individual meals and delivering food to different sites, but as a data analyst, I could not help but think of different ways where data could be useful in this situation. 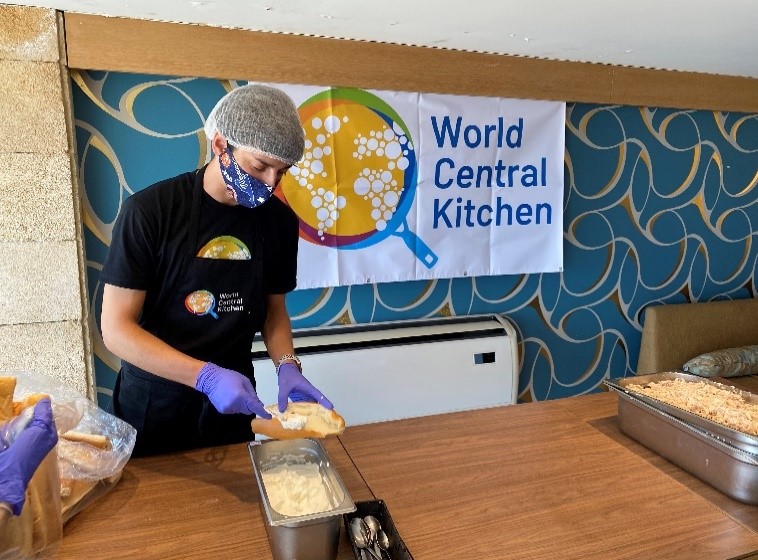 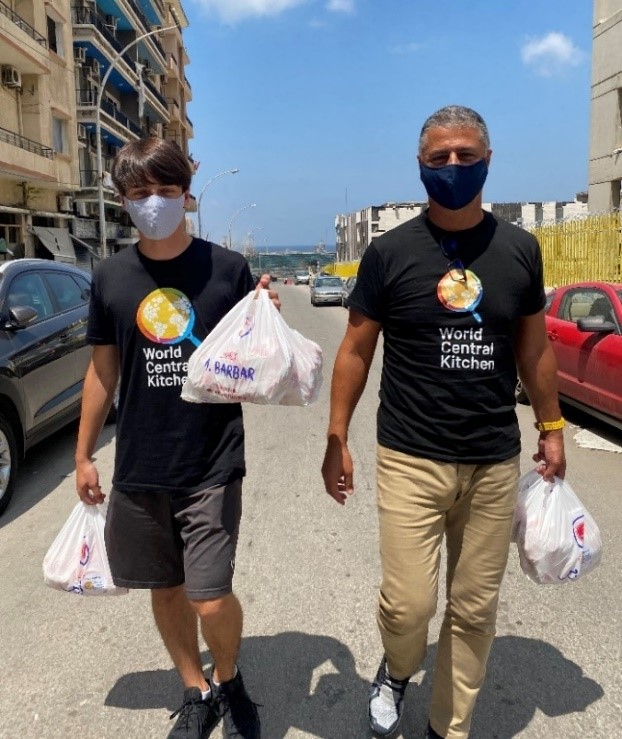 One thought I wanted to explore more was if the same blast happened elsewhere, what would the impact be? To do this, self-service analytics was crucial because I could use a tool (in most of my analyses, this tool is Alteryx) to answer my own question. I built an Alteryx app, which is a workflow with a user interface that contains interactive elements. An end-user is able to personalize the results through the user interface, can click run, and then see their map in no time. In this case, I started with a relatively simple workflow: input a latitude-longitude value, make it a spatial point, create a radius surrounding the point, and output the mapped result. Then, I added the necessary tools to convert the workflow into an app. Here is the first visual representation of the Beirut explosion I created via Alteryx:

Building upon the first iteration, I just needed some estimated radii to help map the differing levels of destruction based on the distance from the blast. Per Global News CA, “areas within a 1-kilometre radius of the blast suffered the worst destruction, structures in the 5 km radius were heavily damaged, and the 10 km radius represents how far damage was reported.” Using this information, I updated the app to output the 1km, 5km, and 10km radii surrounding the single point. Below, is the updated visual representation of Beirut’s blast: 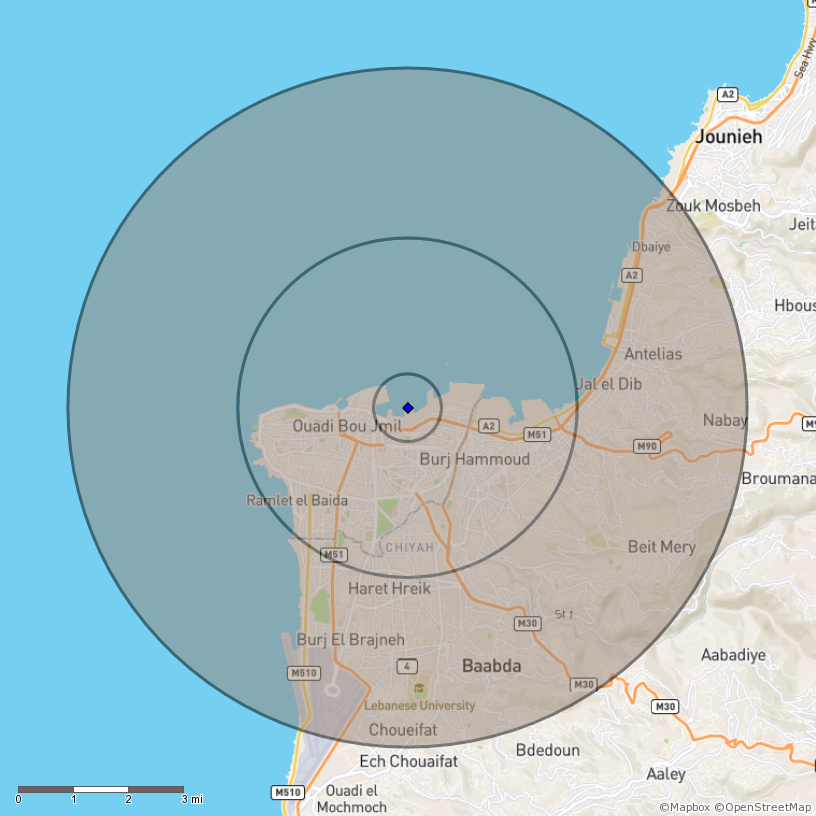 This map was impactful to see, so I started to share the app with my colleagues. Christa, an avid Alteryx user, quickly pointed out that the map was insightful, but not entirely convenient. She reminded me that latitude-longitude values are not usually readily known. So her feedback turned into a question of how to make this app become more functional and user friendly. People may not only be curious about the impact in major cities around the world, but also about the impact it would have on their specific hometown. Luckily, using more self-service analytics, I was able to build out more functionalities to incorporate the suggestions from my colleagues.

In addition, Philip, a colleague and Alteryx ACE, collaborated with me to continue to make improvements. Philip added differing colors/shading for the radii, cut down the amount of tools used in the workflow, and simply made the app more efficient. These are things I did not know how to do before, but they are now part of my toolkit for future analyses thanks to the collaboration. Here is the final visual representation of Beirut’s blast: 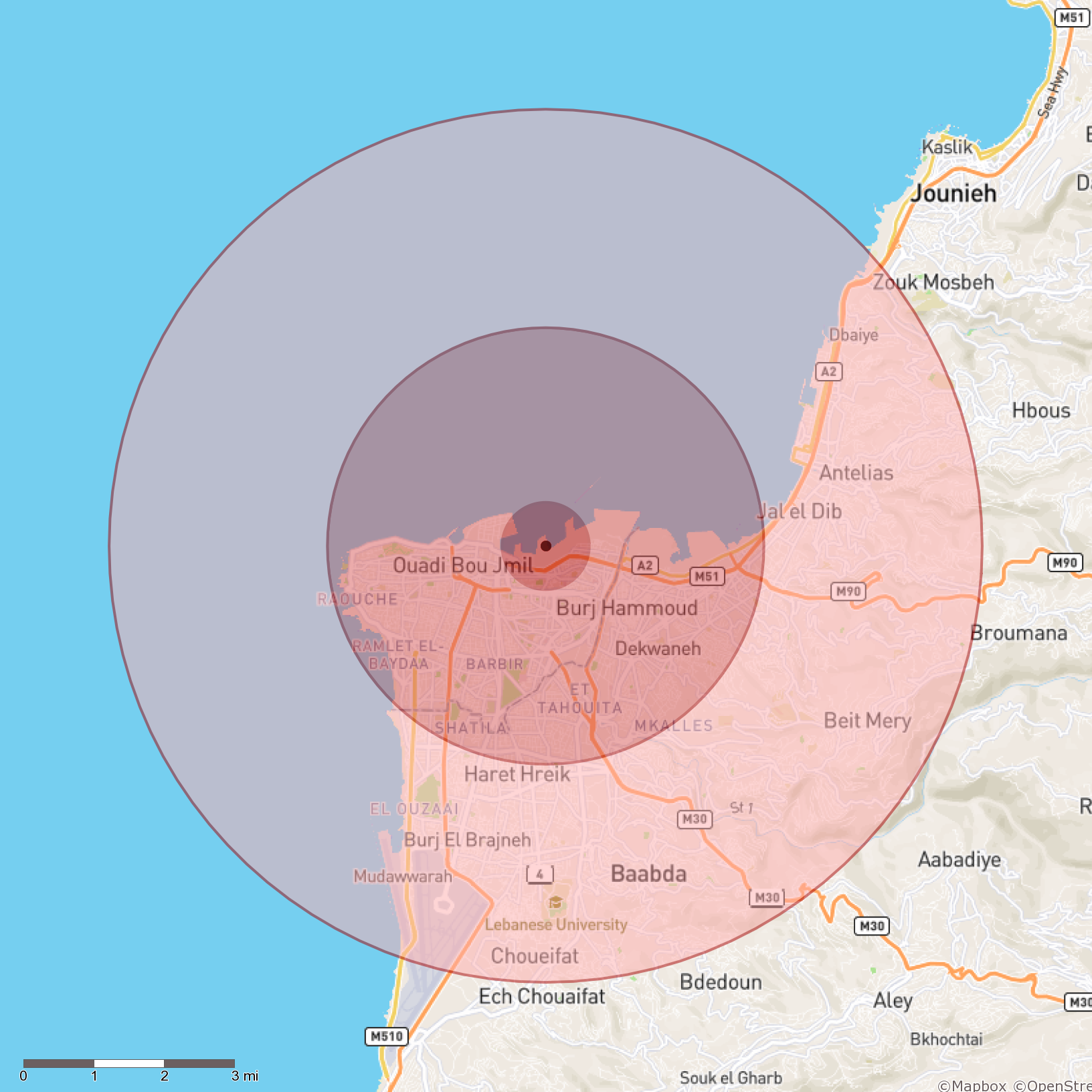 Now we have an app with multiple input options for the end-user as you can see below. Just click on the image to open a new window to try out the App.

Each setting within the app is designed to guide the user. The app intentionally defaults the values to the exact location of the Beirut explosion so that others can understand the impact without any additional input. For those curious to relate the blast to some well-known locations, here are some of the top major cities with the same blast radii: 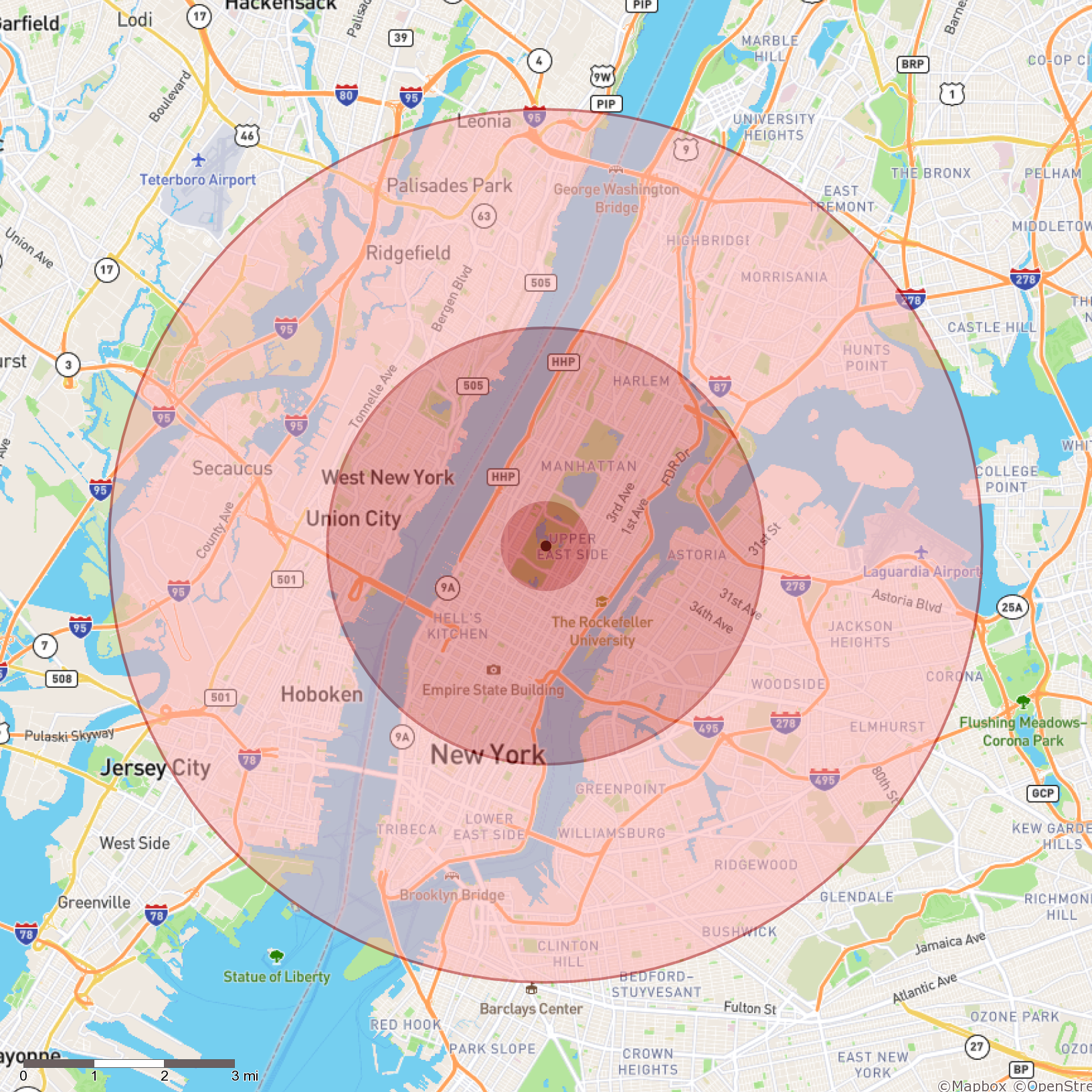 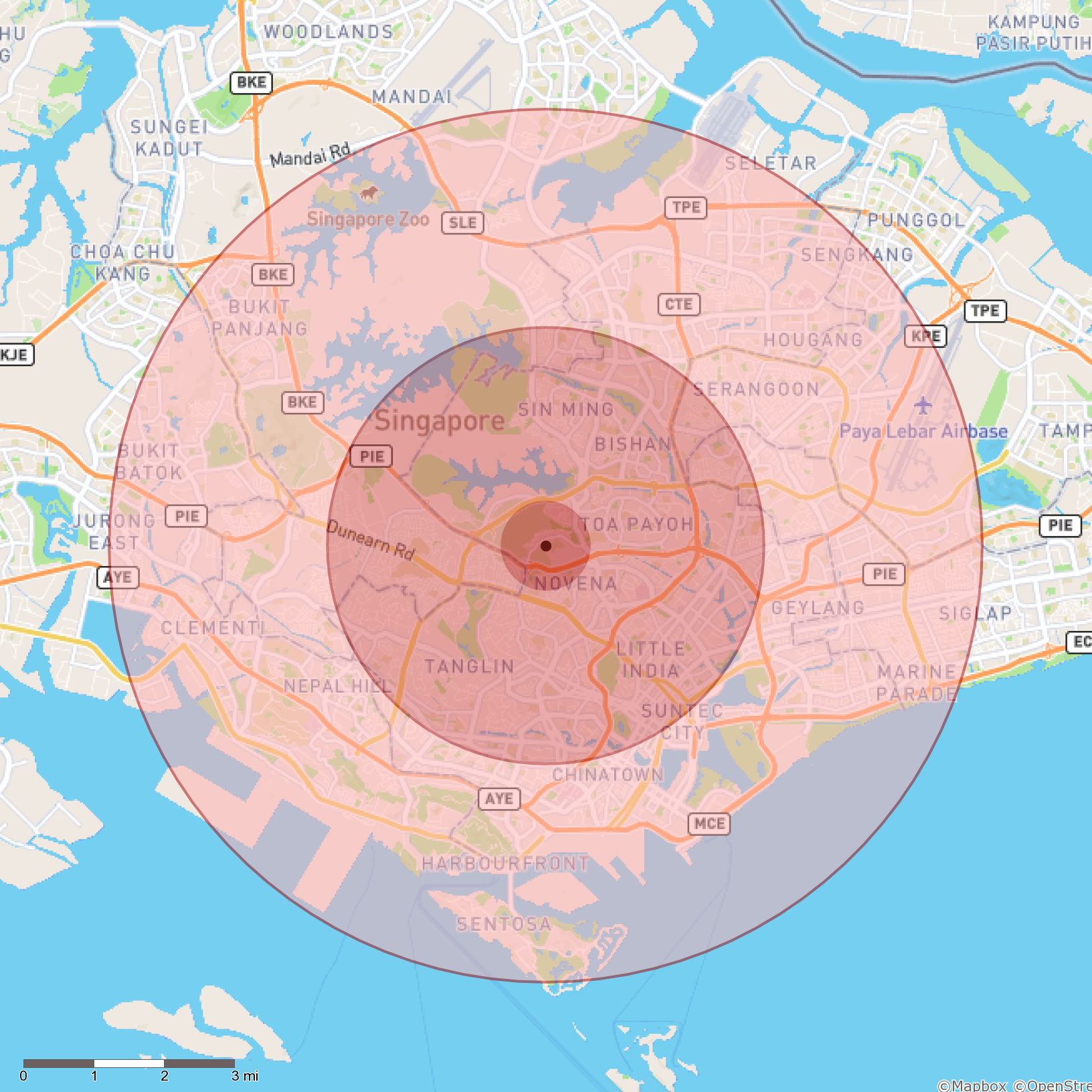 On the left is New York, New York, USA – The worst damage could reach up to half of Central Park. Most of Manhattan Island could be affected, not to mention the George Washington Bridge, Lincoln Tunnel, and Brooklyn Bridge among others. As of 2016, these three crossings alone handle over 500,000 vehicles daily.

On the right is Singapore, Singapore – The estimated 10km radius encompasses the most densely populated parts of the country. 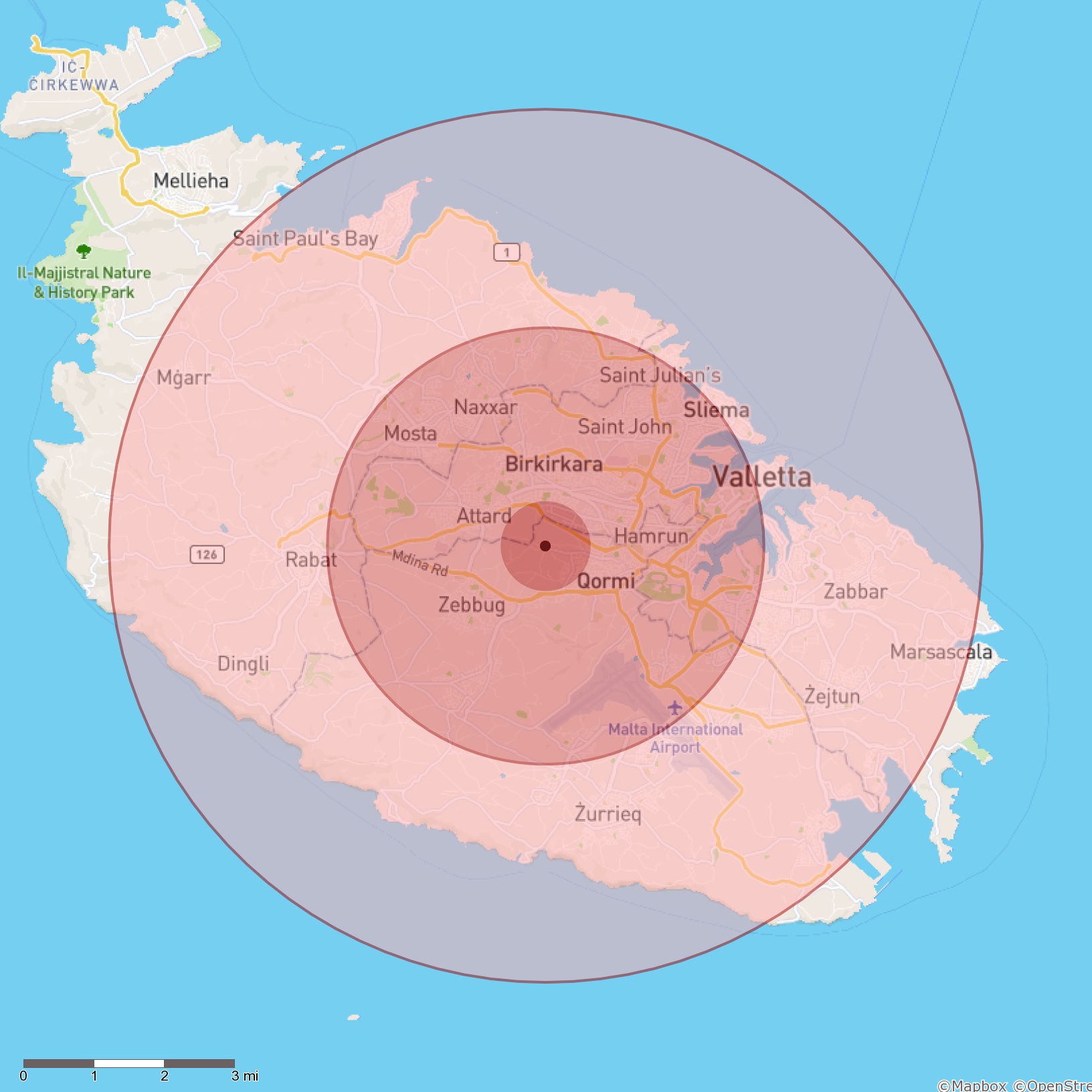 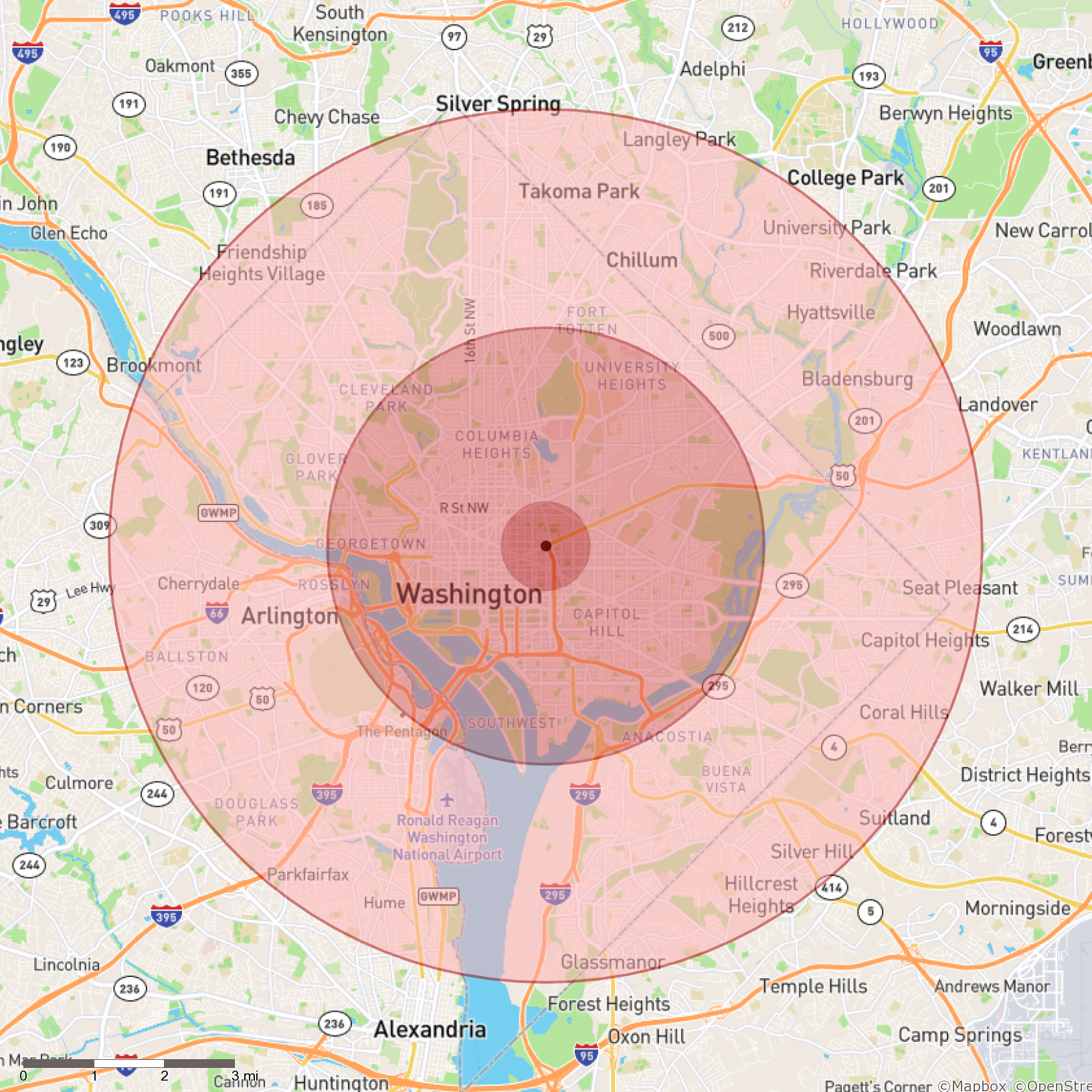 On the left is Malta– The majority of the island country could have been affected including the island’s only airport.

On the right is Washington, DC, USA – The affected zone could be the United States capital, plus a good portion of Arlington, Virginia and surrounding areas in Maryland. Three different governing bodies would be charged with a response.

As one can see, this explosion would have devastated many places. In fact, judging from the map output by the app, we are lucky that the explosion in Beirut occurred at the port and not in the middle of the city. A good portion of the blast impact, an estimated 60% according to those in Beirut, hit the port and sea, ultimately limiting the toll it could have taken on Beirut. Nevertheless, it was a tragedy that has impacted thousands of people and caused billions of dollars of physical and emotional damage that will take years to repair.

Let's use this moving forward

Of course, this app could always be improved. What if we somehow enabled a user to input an international address or search Points of Interest, such as the Eiffel Tower or the Sydney Opera House? What if we enriched the data to include population densities and be able to calculate the number of potential people affected? There is a balance between building functionality and the time/effort it might take to do so. Will these other impressive yet more-complicated functionalities be used enough to warrant building them? Is the data to be able to build out these other functionalities even available? These are the kinds of questions that need to be asked to build apps efficiently and effectively.

This kind of analysis could truly be useful for first-response organizations such as the Red Cross. Imagine hearing about an explosion elsewhere and being able to calculate the number of people possibly affected using worldwide population density data. This would help determine supplies needed, buildings affected, how many people should be deployed to help, and so much more. The possibilities of using self-service analytics and data are truly endless, and the beautiful part is that these workflows can be consistently updated to become more and more advanced as time goes on. Imagine being able to map out your tent sites, estimate a small radius around it, enrich the map with demographic, population, and/or drivetime data, and determine the areas that are being under- or over-served. More insights and requests come up through this iterative process, and more answers can be provided. These kinds of analyses are exciting to ideate because of the profound impact that they have the ability to provide, and for data analysts such as myself, I am excited to make a true impact on the world through self-service analytics. 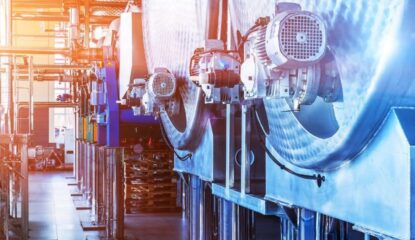 Throughput optimization maximizes the rate of materials progressing through the production ... 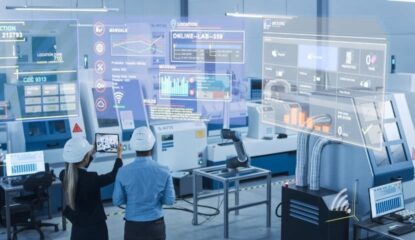 Data analytics is revolutionizing many industries, including manufacturing. Manufacturers have ... 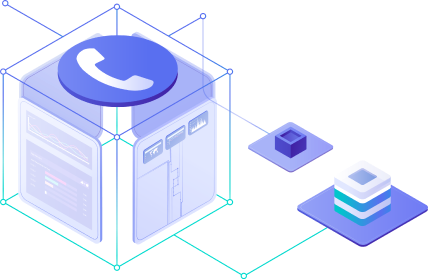